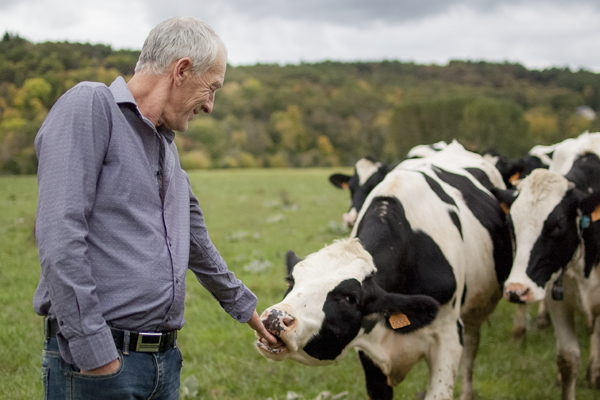 (BDN) -- Summit Utilities said Thursday that it will invest $20 million and create up to eight full-time jobs in a partnership with eight Clinton-area dairy farmers in a project designed to generate clean energy.

The parent of Augusta-based Summit Natural Gas of Maine said it will heat cow manure to produce high-quality fertilizer for the farms and renewable natural gas for its own pipeline. The company will construct an anaerobic digester in Clinton to process the manure.

The partnership is part of Summit’s sustainability initiatives.

“The ability to make homegrown energy, create green jobs and support some farms while doing something good for the planet is a rare opportunity,” said Angus King III, Summit Utilities’ chief development officer. “We’re really excited to be doing our first project here in Maine.”

If that gas is not captured and reused, it goes into the atmosphere in the form of methane, a potent greenhouse gas.

Summit said it plans to build an anaerobic digestion facility in Clinton, whose five dairy farms make up 17 percent of the state’s dairy production. The digester will be powered by natural gas.

The proposed digester will turn manure into biogas, a liquid with the same nutrients as the manure and a solid fibrous material. The remaining liquid and solids will be returned to the farmers for free in return for supplying the manure.

“It’s an even exchange,” King said.

After the manure is heated and decomposed, Summit will clean impurities from the biogas and inject it into its natural gas delivery system. Summit serves the Kennebec valley, Cumberland, Falmouth and Yarmouth.

The project consists of a reception pit for the manure, the digester and the gas cleaning equipment.

King expects up to eight new full-time jobs at the facility. Four will be jobs to operate the digester and another two to four will be to truck the manure to and from the farms.

“This is creating options and opportunities for our family farm,” said Jenni Tilton-Flood of Flood Brothers Farm, Maine’s largest dairy farm with 3,400 cows. Of those, 1,800 are milked daily to produce 17,000 gallons of milk.

Each healthy dairy cow can produce up to 100 pounds of manure per day, she said.

“This project is an important endeavor that will provide an opportunity for farms to diversify, which is critical to the future viability of Maine’s agriculture,” said Julie Anne Smith, executive director of the Maine Farm Bureau.

“This is the type of out-of-the-box thinking that will take Maine to the next level,” Maine Public Advocate Barry Hobbins said. “It’s striking the perfect balance and partnership between traditional industry and innovative new technology that will create jobs, strengthen the economy and build a clean, renewable energy future.”

The digester will be located on Flood Brothers Farm. Tilton-Flood is a second-generation farmer. The farm has three generations of farmers living on it, with six families and 21 family members.

Tilton-Flood said the liquid she will get back has the same nutrients as the manure, but will be easier to spread. The solid parts could be used for animal bedding in lieu of sawdust or for compost. Both could save money.

The renewable attributes from the digester, which are similar to buying carbon credits to offset excess carbon emissions, will be sold to third parties to help them meet emissions reduction goals, Summit said.

Summit expects that the digester will supply about 125,000 million British thermal units of gas annually, the equivalent of about 45 percent of Summit’s annual residential gas demand in Maine.

There are other digesters in Maine, but only one uses manure, King said. That is at Stonyvale Farms in Exeter, where farm manure and food waste is used to create electricity.

The Clinton digester is the first part of Summit’s three-part renewable gas program. It also plans to match 5 percent of its Maine residential gas demand for the next year by buying renewable gas attributes, which are similar to carbon credits that offset excess carbon use.

King said that will happen before the digester is running. The aim is to publicize the renewable energy benefits of the digester.

The third part is developing a voluntary option for Maine customers, who can pay for renewable gas attributes to offset their carbon footprint.

“The average customer in Maine uses about 100 decatherms of gas per year,” King said. “If they wanted to offset 10 percent of that usage, they would pay an extra $7.44 per month in their bill.”

Summit would handle the purchase and sale of the renewable gas attributes.

Summit filed a request with the Maine Public Utilities Commission on Thursday, asking permission to set up the offset program.

Summit’s president and CEO, Kurt Adams, said that since the company branched into Maine from its Colorado headquarters in 2013, it has reduced carbon emissions by an estimated 69,000 metric tons a year through conversions to natural gas and energy efficiency upgrades.